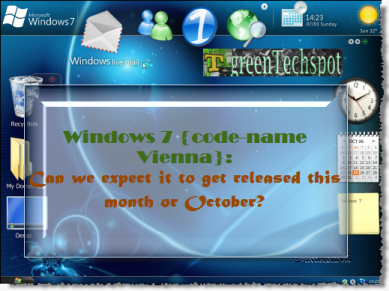 Windows 7 [Code name Vienna] is the latest from Microsoft OS family. After vast success of Windows XP and somewhat unsuccessful marketing of Windows Vista, Windows 7 is surely on going to Hit the market with a bang. In case you don’t know about Windows 7 then have a look at this article @ Wikipedia. So far Microsoft has already given away demo version to many users. [Although the download is not available now]. But still no one knew the release date of Windows 7. Well not yet now! A trustworthy source of Windows 7 news Windows7news.com has managed to get the leaked news of release date of Windows. Want to know more? Then please on…

Acer has confirmed October 23 as the release date for Windows 7 according to the technology news site Pocketlint. We already mentioned earlier today that Microsoft was aiming for a holiday season 2009 release for their upcoming operating system Windows 7 which would go along with the release date leak. The article interestingly enough speaks of a 30 day free upgrade period prior to the release of Windows 7 which would be different from the currently expected free upgrade period beginning on July 1. The new free update period would start two months later than expected.

But they also say that:

Reliability of the Source
Quite shocking isn’t it? Now if you ask me the dependability of this source and the news then all I can say is “We have to wait and watch.” In fact there have been many news/rumors that Windows 7 is going to get released within 5th of this month. Now there is still no clear clarification from MS isn’t it? All what we can do is wait and watch. In fact you might get interest on analyzing the marketing policy of MS with us [Well a little bit]

MS & its Marketing Strategies:
Personally I have always liked the marketing strategy of Microsoft. Although I am a great fan of Open Source and freeware alternative but still I use Windows XP along with Ubuntu in my PC, but still Microsoft marketing policy is something which amazes me! For example we all know that Pirated Version of Microsoft Windows7 are available all over the net via P2P or so called torrent services. But the question is that who leaked them? If you google a little bit and watch some trustworthy source of MS news then you will find “It was perhaps one of the Marketing Policy of Microsoft“

. See this article on microsoft-watch.com to find out more on this!

Are you Windows7 RC [Release Candidate]/ Windows Vista user?
If so then don’t bother to buy a copy of MS Windows7 right now! There are news that Windows 7 RC has been given an expiration date far ahead in the mists of time: June 1st, 2010, to be exact.
So use it and buy it only if you like! Also Windows Vista Genuine Users are going to have free upgrade to Windows7. So if you are a Vista user then its time for you to be happy

Have Your say:
Well I do will buy a copy of Windows7 for my self from my local retailer

. What are you going to do? Please let us know through your comments.