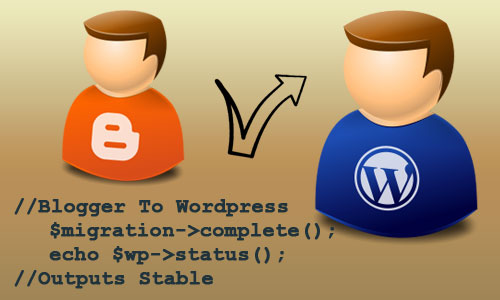 Its been a while we started the migration from Blogger to WordPress! As told before, Rahul’s Post from Devilsworkshop helped me a lot (infact, I just followed that tutorial only) to make the migration as smooth as possible!

Now, after almost spending 1 week, we are really happy to announce that our blog is now finally on the stable state! WOW!

What more? Well, as you know previously we have been using IntenseDebate as our Blogger default Commenting system! So practically, WordPress was not able to import comment from IntenseDebate! Although ID does have a plugin which helps in comment migration, but it is currently down due to some server upgrade! Our bad luck eh?!

Well, not actually! To save all our comments, we developed a plugin which does the job! It actually reads the comments from IntenseDebate XML backup, and put into your database based on the post title! Basically, we just modified the great plugin by Josh Fraser to make it read read user uploaded XML file, instead of looking into the intensedebate site and to parse the new structure of the Backup XML file properly!

Really, we just can’t wait to release our new WordPress plugin! That is just going to be next 😉

Coming more are, more PHP, MySQL and jQuery stuff! I hope you will enjoy them all!