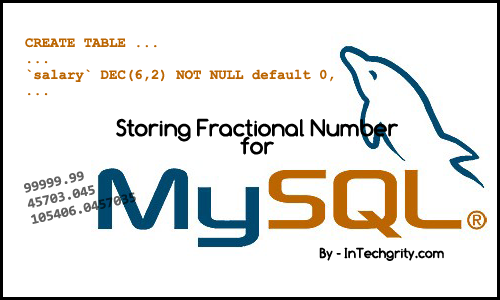 Unlike integers, we sometime need to store fractional values to the database. Suppose, you are to store score of a student to a database. The score can be in fraction as well. So, if you define the score column in integer, then what will happen is, the decimal part of the number will get stripped off and only the integer value will get stored. Obviously you wont want that to happen! So, now let us how we can use the powerful decimal & float datatype of MySQL to store fractional numericals on the database…

One may get confused that decimal and float both are the same. In terms of mathematics they are same but not in terms of memory and precision. FLOAT stores numbers in approximate precision. Where as DECIMAL stores in exact and exactly the same precision defined before. If you try to change the precision of a float column, then you may see some change in the number after the decimal point. Whereas, if you do this in decimal then there won’t be such changes.

Practically, it is better to use DECIMAL, for storing exact datas. It very useful for monetary stuffs. Use float only when you can live with some approximation. Personally I recommend using DECIMAL only. To be more precise,

Although, as of MySQL 5 (Not sure, whether it was there in MySQL 4 or not), it provides a non-standard syntax of storing precision definition for float as well, but I recommend to stick with the standard SQL behavior of float and double.

FYI: Decimal and Numeric are exactly same and nothing but synonyms in terms of standard SQL as well as MySQL. So, don’t get confused over that. Also, datatypes like REAL, BIT are hardly used. So, we will cover them in another tutorial.

I hope, it clears your doubt between float and decimal. As of our recommendation, we will use DECIMAL only through out our tutorial.

The syntax of DECIMAL datatype of MySQL:

Just like any other MySQL datatypes, we need to define it during the creation or alteration of a MySQL table.

The default syntax of DECIMAL is

Where, m is the total number of digits and n is the number of digits after the decimal point. Say, you want to store some numbers like the format 9999.9099999. Here the value of m is 11 and that of n is 7. So the syntax would be,

Say, you want to create the following table:

The columns id and name are INT and VARCHAR respectively. Where as, the salary and score columns are the DECIMAL of 2 and 1 precision respectively. We execute the following SQL command from the terminal. Make sure that you have created and used a database.

This would result in this: 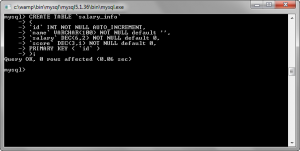 Now, to dump the data, we execute the following command: 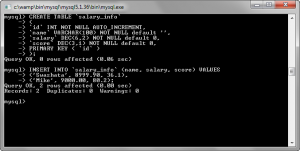 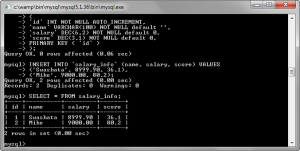 Hope, that gives you the exact idea of how to work with MySQL Decimal datatype. Now, for experiment let us execute the following command: 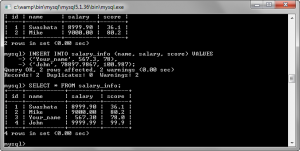 Quite interesting right? Basically there two things to remember when inserting a number not in accordance with the DECIMAL definition:

The range of decimal varies according to the value of m and n respectively. Say, we have defined DEC(5,2). Then the range is -999.99 to +999.99. The following points are to be remembered while dealing with the range of DECIMAL.

And, that was all about MySQL datatype to store fractional data with DECIMAL. Hope it was useful for you! If you face any problem feel free to ask.