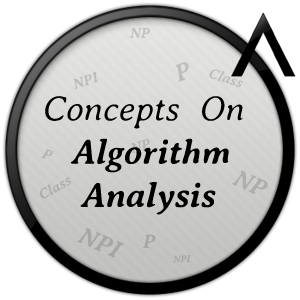 ¶ personally thank all those programmers who build lots of cool and useful applications on internet and many of them deliver it free of cost, but they lack in theoretical computer science background. For that reason i came up with this idea and turned on my P.C and started typing.The idea behind theoretical computer science is Algorithm Analysis, trust me you are all going to love this because this going help you to deal with programming pragmatically since you have the art but not the background.

So I am done with my babbling and lets make it quick and simple..

As you know girls don’t come easy and each have different keys to unlock, same are the algorithms(considered as problems).

Problems are solvable or unsolvable

Solvable : Hurrah!! She accepted my proposal.   😆

Unsolvable : She takes too much time. 😳

Therefore in programming life too we  face the same problem of algorithms, which cannot be solved in reasonable time and are considered as practically unsolvable. Another thing which we should consider in the storage space.So it brings to this conclusion :

Now that you know about the type of girls that exists , its time to tell you  some thing or two about them  :

Trust me if are willing to follow such rules in understanding the complexity of any girl i’ll bet you are in the right direction,Oh boy!!

Now finally the most important part of all , how do you actually find the complexity? have any idea..

Very disappointing, since you don’t have the answer let me say it-

Let me show an example :

Run it and plot the result  and you will be getting a graph like this.. 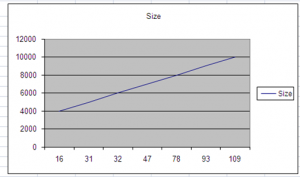 In this way you can study each and every algorithm performance.

Its more of a trained way of understanding a girl but in my personal opinion I prefer the Experimental one though it beats me a lot.

Time complexity of algorithms are expressed using the O-notation.

Let f and g be functions on n, then:

That is, an algorithm A is polynomial time if timeA(n) <= f(n) and f is a polynomial,

Now this might look a bit confusing ,but read it twice to swallow it permanently.It works!

Lets check out some examples:

Enough!!   😳 she takes too much time, lets move on, Sad but True. This reminds me of someone 😳

Class P is known as PTIME or DTIME ,is one of the most fundamental complexity classes.Remember these classes were introduced to make things easier not to make them more complicated.  It contains all decision problems  which can be solved by a deterministic Turing machine using a polynomial amount of computation time(or polynomial time).So does that make things easier ? At least you have a class to deal with.Don’t ask what is a Turing machine,because there’s a whole lot of things to say.. anyway in short it is a device that manipulates symbols on a strip of tape according to a table of rules.So it  can be adapted to simulate any logic or algorithm.And most importantly it explains the nature of the CPU of any computer.

All the algorithms which falls under Class P are said to be efficiently solvable or tractable.

Given the decision TSP: for a set of n cities C={c1,c2,…,cn} and a distance
between each pair of cities ci and cj given by dij € Z+. Is there a tour of all cities,
starting and ending in city c1 and visiting each city exactly once, such that the
total distance traveled ≤ b?

The number of possible tours is (n-1)!
A deterministic machine would be able to explore only one tour at a time so it would take exponential time to solve the decision TSP.

Every language in P is a recursive language.

In this case the decision TSP , a non-deterministic machine (with unlimited parallelism) would be able to solve the decision TSP in polynomial time.Let be NDTM a non-deterministic Turing machine and input x € S*.Then there is at least one computation sequence (possibly more) by which NDM accepts x.
The time taken by NDTM to accept x is given by the length of the shortest of the computation sequences by which NDTM accepts x.

The time complexity timeNDM of a non-deterministic Turing machine NDTM is
given by:

1 if no inputs on length n are
accepted by NDTM;
min{m | there is an x € Sn such otherwise
that the time taken by NDTM to
accept x is m };

NDTM is polynomial time iff timeNDM(n) is O(nK) for some k > 0.Then, the class NP is defined as the class of problems which can be solved by
polynomial time non-deterministic algorithms. Problems in NP can be verified
‘quickly’.
NP = { L | there is a polynomial time non-deterministic TM which accepts L}
It should be clear that P subset of NP.
It is widely believed that P ≠NP but this has not been formally proven.
NP-Complete problems arise in many domains like: boolean logic; graphs, sets
and partitions; sequencing, scheduling, allocation; automata and language
theory; network design; compilers, program optimization; hardware
design/optimization; number theory, algebra.

Then, within the class NP there are easy problems, those in P, and much
harder problems called NP-complete problems.
Intuitively, the class NP-complete are the hardest problems in NP as defined by
Cook’s theorem.
More formally, problem ∏ is NP-complete if ∏ € NP and for any ∏’ € NP ∏’ ∞ ∏.
Assume two problems ∏1, ∏2 and an algorithm A to solve ∏2. If each instance of
∏1 can be easily (in polynomial time) transformed into some instance of ∏2 then
we could use algorithm A to solve∏1.

Accepting that P ≠ NP does not mean necessarily that P U NP-complete = NP.
Some problems might not be in P neither in NP-complete.

It has been shown that if P = NP then NPI = NP – (P U NP-complete).
However, the vast majority of practical problems are in P or in NP-complete.

It is a conjecture that the decision problems: Graph Isomorphism and
Composite Number are both in NPI.

given two graphs G1 and G2, is G1 isomorphic to G2?
For the special case of G1,G2 being planar, the problem is solved in polynomial
time.
But no polynomial time algorithm has been found to solve the general case. And
no one has been able to prove that Graph Isomorphism is NP-complete.