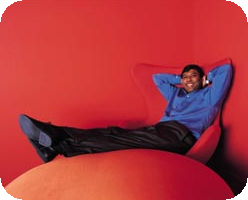 Like everyone else I´ve spent some time thinking about why some people are so
successful in life.Successful people might be intelligent. Or have had a
socially well connected upbringings. Or be naturally energetic and open and
positive.
Mr. Naveen Jain is one such person.Naveen Jain is a founder and CEO at Intelius which he started in
January 2003 with a mission to empower consumers with online information for
personal protection and intelligent decisions.
Previously, Naveen launched InfoSpace in March 1996 with the vision of
delivering real-world information on the Internet – anytime, anywhere and on any
device. Previous to InfoSpace, Jain was a Program Manager at Microsoft
Corporation from June 1989 to March 1996. After spending 7 years on Microsoft,
he

Got tired of making billions for Bill

Shocking isn’t it? Well there is more inspiring facts about the Intelius CEO…
Let us talk a little about his biography…

He was born in 1959 in the northern Indian state of Uttar Pradesh. The son of
a civil engineer, Naveen
Jain was brought up in humble surroundings. In his youth he witnessed
firsthand the dire consequences of poverty and illiteracy, especially upon women
and children.His parents taught him the importance of education as a key to
improving one’s life. People like  Bill Gates and Steve Jobs were his
inspiration. Through their example, Naveen
Jain understood that success is simply not doled out; it must be earned
through hard work, persistence, educational commitment, and even a little good
luck and timing. Indeed, Naveen Jain personifies the old adage “You make your
own luck.”
Naveen and his spouse Anu Jain have dedicated themselves to funding and
promoting a wide variety of causes that give struggling children and their
families a fighting chance at success and an improved quality of life.They
together run many nonprofit organizations.Some of them are:

Now his company Intelius (Google PageRank #6) is
famous for giving several services like Verification Service, Information
Service, Protection Service and several other Business
Services. Have a phone number of your friend and want to know his address to
give him a surprise? Then Intelius is the place for you! (Note that you can only
search information and location of US residents only)

You can also visit his crunchbase
profile

So how you liked his portfolio? Do give your feedback…